The Trojan War was a ten year war between the Greeks and the Trojans. It began when the prince of Troy, Paris, abducted Helen of Sparta, wife to King Menelaus. Paris won Helen as a prize for naming Aphrodite the fairest goddess of them all and awarding her the Golden Apple of Discord, incurring the wrath of Athena and Hera. Paris brought Helen to Troy and was soon pursued by the entire Greek army which then laid siege to the city. 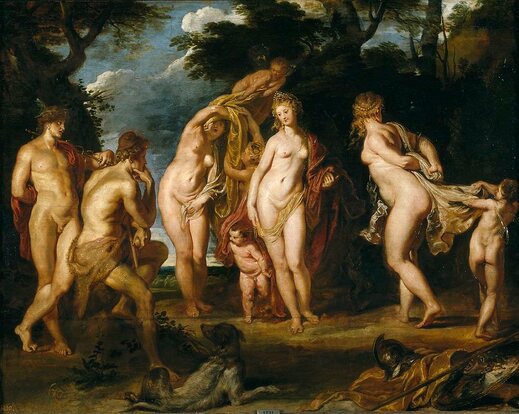 The Judgement of Paris, 1639 by Peter Paul Rubens
The Trojan War featured many of history’s strongest soldiers, including Hector and Achilles, along with various gods taking sides of the war. Hector was a Trojan prince and Paris’ brother. He was killed in one-on-one combat with Achilles, the best soldier among the Greeks. Legend has it that Achilles’ mother bathed him in the river Styx to make him invulnerable and left only his ankles defenseless. Paris killed Achilles by shooting an arrow through his heel. The arrow was guided by Apollo, the god of prophecy. 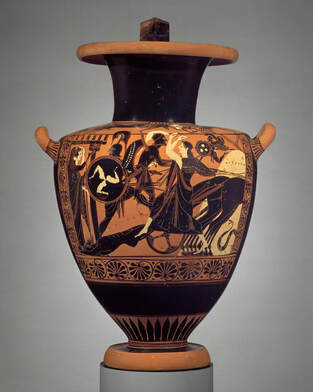 Achilles & Body of Hector, 520-510 B.C. attributed to the Antiope Group
The war continued to rage and Paris was killed by the Greeks. With no end in sight Odysseus, a Greek general, came up with the idea of the Trojan Horse. The Greeks hid men inside the horse and then left it as a prize for the Trojans and a symbol of their surrender. The Trojans then brought the horse inside the city and began to celebrate. 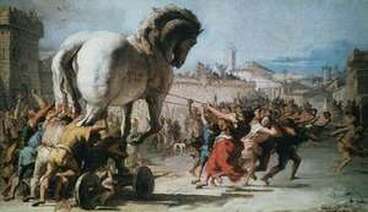 The Procession of the Trojan Horse into Troy, 1760 by Giovanni Domenico Tiepolo
​Only Cassandra, a Trojan princess and cursed prophet of Apollo, saw the truth behind the Horse. She tried to warn her people against taking it into the city, but they did not heed her. That night, the Greeks ransacked the city and killed the Trojan king Priam, winning the Trojan War.